... as promised... more TS info... this time with less fluff.  I started re-reading my previous post... and quickly decided... mmmkay too much fluff.  It needs a rewrite...  so... this time... I'm not going to be so "non-tech" friendly.  Forgive me if I glance over several things & get right to the meat of this.

In short... here's the goal of what we're looking for when it comes to  getting redundancy going...


Although there you see 5 servers in this model... we only have 2 to play with.  (in this particular environment) but hey.... the the process is still similar.  Lets cut this down a bit more & see what we end up with. 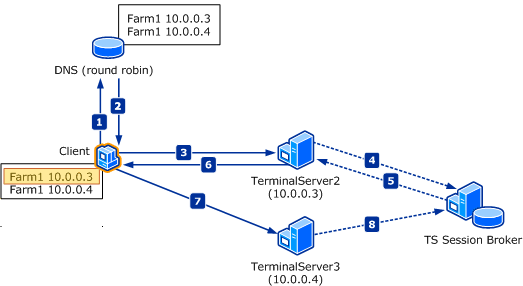 Woohooo 3 servers... makin' progress...  of course... we're not even touching the gateway services yet... and the session broker ends up becoming the weak link.   What if it dies? ... evil phone-calls.

Ideally... that's how the magic all works!  Woohoo!

Ok... lets add a few more pieces to this puzzle.

Those purple servers are Gateway Servers...  If you look at the previous diagrams... they use private IP addresses... the job of the gateway server... is to securely bridge that gap between the public internet... and the private network.  Why 2? .... and why doesn't one have any lines connected to it? ... well... round robin DNS is round robin DNS... int his particular example... the random server it found was the top one.  The client's connection sticks with that server.  Had the client randomly picked the other server... the lines would all point to the other server.


In order for this to work... the client needs an additional config option set to use the gateway servers.  Not really a big deal as you'll probably end up deploying a .rdp file or setting up a portal to your users.  When a gateway is thrown into the mix, the clients actually use a HTTPS connection rather than the standard RDP (tcp 3389) connection... and add a *needed* additional layer of security.

So... the process changes a bit.
and from there it behaves like normal... juggling around between servers until the new session finds the correct server.  (Either resuming a disconnected session, or starting a new one on the least-used server.)

And now, for the final piece.  That connection broker represents a single point of failure.  We're trying to build a setup with minimal points of failure.  So... the "Microsoft Answer" ... is to throw yet another server into the mix as a fail over.

So... there we have the "Microsoft" plan.  6 servers... to go from a single session host to adding a 2nd session host to the mix.  Admittedly, this is a great model for scalability to a HUGE deployment.  Most small businesses won't really need this level of scalability.  A single server can easily host 20-50 sessions... or even more with the right hardware or moderate to light weight applications.

In my situation and probably many others...  I can't justify that sort of expense when more than half of those servers will be sitting relatively idle... So... I set out to consolidate the roles each server performs... while still keeping the redundancy and all the benefits of each role.

12:54AM .... and tomorrow is another day.  I'll layout how I consolidated each roll into 2 servers tomorrow.
Posted by TheCompWiz at 12:56 AM